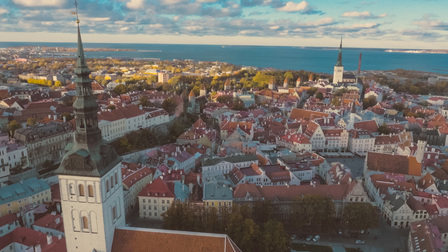 Old Town in Tallinn. As you can see, it's a real shithole.
On a 2015 trip through Scandanavia, my fiance Susan and I traveled through Tallinn, the beautiful medieval capital of Estonia. We went in blind, expecting a drab Soviet gulag, but were shocked by when we discovered a vibrant city filled with charming people who spoke english with the accent that makes our women so vulnerable to their overtures.

After an all-too-brief visit, the time finally came to depart. For the next leg of our trip, we were scheduled to fly to Moscow. Following an Uber ride (where our driver, a man named Tiit (pronounced 'Teat') warned us for the umpteenth time to watch out for Russians, we arrived at the airport. 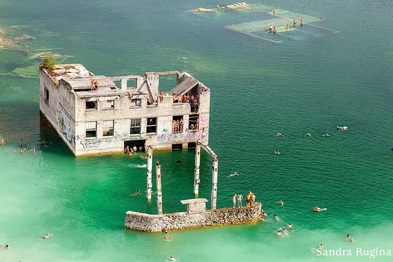 Searching for an image of a harsh Estonian prison, I found this harsh underwater gulag in Rummu (now a tourist beach), proving everything is apparently gorgeous in this country.
When traveling, Susan and I carry something we call "The Feed Bag." Said bag is a simple plastic bag packed with snacks and drinks. It's a simple economic measure to avoid paying the exorbitant prices of, say, and airport.

At the security checkpoint, Susan entered the metal detector first. As our feed bag passed through the X-ray scanner, the conveyor belt abruptly stopped and a quick conversation ensued between the operator and a male agent of what was apparently the Estonian TSA agent. "Excuse me," he politely called out to Susan. "Is this your bag here?"

"What's the problem?" Susan asked, although she knew exactly what the issue was. So did I - our feed bag contained a mostly-empty jar of peanut butter containing, at most, half an inch of Skippy's finest Honey Roast. As veteran travelers, both of us knew damn well that airlines consider peanut butter a gel and wouldn't allow it on the plane. Normally we would have handled this problem in advance, but Susan and I had gorged ourselves on hearty Estonian delicacies. Thus, the old smuggle-a-roo attempt.

A certain script dictates this type of encounter. In it, Susan would feign confusion over the rules and allow the Estonian TSA agent to throw away the offending peanut butter. We would be out the 37 cents, but would live to smuggle other foodstuffs another day.

Susan, however, decided to break from the script and attempt the impossible: talk her way through the security checkpoint with peanut butter intact. She began debating the security guard in a tone that I recognized as potentially dangerous to our chances of making our flight.

"It's peanut butter, for christsakes," Susan said. "It's food."

"I'm terribly sorry," the security guard said in a way that indicated he truly was. "We aren't allowed to let any gels on the plane. I am afraid it is the rules."

Susan then took a shot at the three ounce exception rule, arguing that our minuscule amount of peanut butter was permissible, gel or no. Again, her position was rebuffed with copiously disarming courtesy.

Despite the agent's genteel treatment, Susan was becoming dangerously belligerent. We've all seen heated exchanges where an argument develops over a difference of opinion. In such a position, the more powerful party always prevails. When the outcome is apparent, the logic governing a decision by the weaker-positioned party to persist, as Susan was now doing, was baffling.

The delay surrounding the search of the feed bag had backed up the conveyor belt; with my bags still on the wrong side of security, I was unable to pass through the metal detector to head off the situation before one or both of us wound up in Estonian prison.

It was then Susan surprised everyone by finding a workable loophole. "What if I make a sandwich, huh?" she challenged. "That too dangerous for the plane?"

The guard was somewhat taken aback. "I... I suppose that would be... OK." Let it never be said that Estonians are not reasonable.

"Fine," Susan said, taking his consideration as imprimatur. "Then that's what I'll do." She abruptly seized the feed bag and carried it a few paces away. 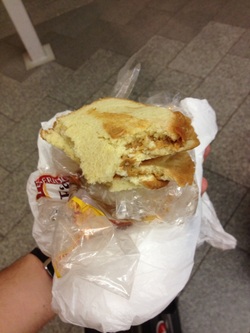 Look at the anger that went into preparing that sandwich.
﻿Other security guards had trickled over to the commotion caused by the difficult passenger, cutting off my view of Susan. I realized it was time to get back there toot sweet. Abandoning my bags on the conveyor belt, I hastened through the metal detector, which beeped angrily at me. As I struggled out of the offending belt, I heard the gentle guard say "This is unusual. I'm not sure this is allowed."

"Of course it is!" Susan roared at him. The last time I heard her this angry was when I tricked her into singing the first two verses of Livin' La Vida Loca**.

I barged through the metal detector and rushed towards the crowd of uniforms. And so, 5,000 miles from home, I found my fiancee ringed by half-a-dozen concerned security personnel, defiantly making a peanut butter sandwich by the baggage carousel.

Nope. As she slathered the crumbling bread, Susan was blurting out angry snippets of internal monologue, like "It's safe now, huh?" and "Peanut butter's gonna blow up the plane... right!"*

If this were Atlanta, Susan and I would have been gang-tackled several minutes ago. Here in Tallinn, no one had so much as drawn their gun as my lover swore angrily after accidentally stabbing herself through her sandwich.

"Susan we need to get out of here," I said by way of announcing my presence. "You're gonna get us Trayvon'ed," I added, hoping the coded reference would convey the gravity of the situation.

Susan didn't take the hint. "You want some?" she snapped, handing me the sandwich to hold.

I sheepishly held Susan's culinary masterpiece, wary of being labeled an accomplice. If the situation developed as I feared, one of us would need to remain free to call the US embassy. 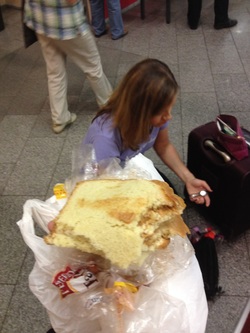 "Motherfucker's tried to steal my goddamn watch- oh, here it is."
"Can you believe this?" Susan asked, blissfully unaware that I did not have her back on this one. "I don't need this Russian shit."

"Susan, we need to go," I murmured urgently. Estonians like being lumped in with Russians about as much as Native Americans enjoy being mistaken for Mexican immigrants.

Thankfully, Susan had made her point. "Here you go, slick," she said, tossing the now-empty jar to the original security guy. He caught it, looking mightily wounded.

"Excuse me," Estonian TSA guy said in a small voice. "We must scan your bag once more. For protocol."

"Whatever," Susan said, barely looking up from tying her shoes. 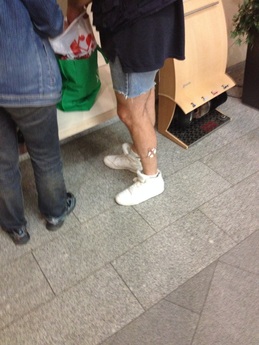 I live in Chicago - I know a gunshot wound when I see one.
At this point, it seemed impossible that anything could distract from the trainwreck that was unfolding. Never say never in a former Soviet republic; as Susan angrily corralled her belongings, a random dude with a mullet lumbered past. Glancing at him in passing, I was shocked to discover that (a) he was wearing cutoff jean shorts that (b) revealed a through-and-through gunshot wound that passed through the meat of his calf***. Naturally, this guy was on our flight as he returned home to Russia.

One crisis at a time though. Our feed bag came through clean. I snatched it up and we made ready to leave.

But not without a parting shot: Susan still held the flimsy white plastic knife she'd used to apply the peanut butter. Without breaking eye contact with the Estonian TSA agent, she licked the peanut butter from the it the same way an ancient warrior might lick the blood of his foes off his dagger. Her expression was somewhere between defiant and crazy. The closest thing I have ever seen to this is the first six seconds of the movie clip below (from the cinematic masterpiece Undefeatable, featuring the best fight sequence featuring a Luke Wilson lookalike ever made).

The Estonian TSA guy visibly flinched. Susan ate the sandwich as we left Estonian airspace. She took it with a side of complacency and a glass of V8.
*Susan maintains she never said any of this, to which I reply: Look at her face and make up your own mind.

**This is surprisingly easy to do. Just tell the person you've never heard of [artist] and ask them to sing a bit of one of their songs. It helps if you slightly mispronounce their name, ex: Neil Daymond or William Joel.

​**We know the bullet passed straight through because he wasn't stopped by the metal detector.